Hannah Albone and I had the pleasure of interviewing the director of Comrade Kim Goes Flying, a North Korean comedy. 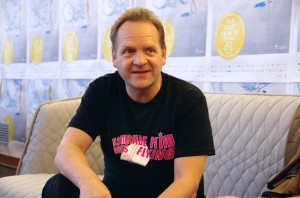 CUEAFS members Hannah Albone and Natasha Harmer spoke to one of the directors of the North Korean comedy ‘Comrade Kim Goes Flying’, Nicholas Bonner. The film was screened at the Udine Far East Film Festival on 26th April 2013.

Hannah Albone: What did you think of the response from the audience here at the festival?

Nicholas Bonner: I was swept away by it, it was amazing. It’s not often that you get 1,200 people who are really supportive. Film festivals are always going to be interesting as it’s an art-house film crowd, but they were so supportive. We had the two Korean leads with us; we had the lead actress and my co-producer…