Largely because it’s an MTV series, the TV version of postmodern horror favourite Scream has, for many people, slipped under the radar. Released originally at the end of June this year the first series is now over and fans are eagerly awaiting the second which as been confirmed for release around April next year. Not a continuation of Scream as such, the TV series follows … END_OF_DOCUMENT_TOKEN_TO_BE_REPLACED

This bank holiday weekend brought saddening news for horror fans. Wes Craven, horror legend, passed away. Horror has officially lost a legend. Wes Craven was a master of horror, directing some fantastic classics in his time with one of the most unique and intelligent perspectives that horror has ever seen. He was at the helm of massively revered film franchises like A Nightmare on Elm … END_OF_DOCUMENT_TOKEN_TO_BE_REPLACED

Ok so I might have had a little bit too much fun writing my previous post about my five must have items in a zombie apocalypse, so I’ve decided to go all out and write some more! There are so many types of horror film I thought it only fair to give a few others a go too. Plus who doesn’t love a bit of … END_OF_DOCUMENT_TOKEN_TO_BE_REPLACED

Here are my ten must-watch postmodern movies… You can also read by 5 must watch postmodern TV shows here if you so wish! 1. Scream  “There are certain RULES that one must abide by in order to successfully survive a horror movie.” Wes Craven, ignoring the fact that since Scream his only contribution to the horror genre  is the atrociously shit film My Soul to Take, … END_OF_DOCUMENT_TOKEN_TO_BE_REPLACED

This supercut film trailer highlights something that a lot of people consider a problem in modern cinema; the representation of gender and race. Here is an article that argues that this kind of representation is a problem that needs to be addressed. In it the author says “The “ONE MAN saves the world and gets the girl” fantasy is strong in the above video, but … END_OF_DOCUMENT_TOKEN_TO_BE_REPLACED

Good horror films are few and far between, and most of the decent ones these days are foreign. I don’t know whether it’s down to a lack of originality, or whether there just isn’t as much of an audience for Western horror anymore, but the last horror ‘icon’ to hit our screens was arguably Ghostface. The first Scream film came out back in 1996, and … END_OF_DOCUMENT_TOKEN_TO_BE_REPLACED

Postmodernism has been my favourite media theory since A-level media studies, and postmodern texts fascinate me.

Scream is one of the most referenced examples of postmodern cinema, and is  a   great example of how some audience members just don’t ‘get’ postmodernism. If I had a pound for every time I’ve heard people say Scream’s a rubbish horror I would probably be able to pay my tuition fee up front!

For me Scream is ingenious. Wes Craven, director of A Nightmare on Elm Street, celebrates and at the same time mocks the horror genre through self reference and intertextuality, even appearing in the background of one of the shots dressed as Freddy Kruger. The entire film is full of self reference and intertextuality that treats the audience as all knowing, requiring us to be active viewers, not passive. 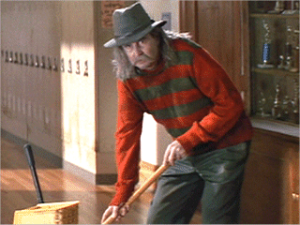 But Scream, released in 1996, is now quite an old example, and there have been a great many recent postmodern films of equal worth.