Please do not read on if you’ve not yet seen the latest AHS episode ‘Devil’s Night’, there will be spoilers!

Lily Rabe made a fantastic return to American Horror story in the fourth episode entitled ‘Devil’s Night’ which aired last week. AHS: Hotel has so far been questionable and all together not as good as previous series’ however Rabe’s reappearance might have just drastically improved things.

In the episode, several famous (and deceased) serial killers attend the Hotel Cortez on Halloween for a dinner party held by the hotel’s owner Mr March (Evan Peters). Among those serial killers is Lily Rabe, playing the infamous Aileen Wuornos who was executed in Florida in 2002 for murdering several men. Lily Rabe has appeared in all of the AHS series’ so far but this time her performance tops them all. Lost in a sea of many other good performances, Lily Rabe has failed to particularly stand out in previous AHS series’ (to me anyway) but this time she really showed off her acting chops with her performance as the crazy yet somehow likeable serial killer.

Anyone who has seen the documentary Aileen: Life and Death of a Serial Killer will easily be able to see the striking resemblance that Lily Rabe has to the real Aileen. Not necessarily in looks but certainly in her mannerisms; that’s what acting is all about after all. Her performance, albeit a fairly small part of the episode as a whole, is outstanding and she really embodies Aileen with all her quirks and characteristics.

Devil’s Night may have just redeemed the entire series. Unsettling and creepy, the episode with its famous serial killers and odd goings on is probably the creepiest yet and may have just completely redeemed this series not only for myself but for others who have also written about it, it seems. For me it was Lily Rabe’s outstanding performance that made the episode and I was in awe of how she so accurately portrayed Aileen Wuornos and I am hoping that she is due back later in the series because her character could be a lot of fun, and also deeply unsettling.

Also returning to the series in the Devil’s Night episode was John Carroll Lynch who played Twisty the Clown in AHS: Freakshow. Returning as killer clown John Wayne Gacy, there seems to be a bit of a pattern emerging and we could perhaps be in store for another creepyass killer clown in the future.

Devil’s Night is definitely the best episode of Hotel so far and it possibly promises for a much better and scarier future for the series. After feeling sorely disappointed by the first couple of episodes, it seems AHS might not have lost a viewer just yet and I’m determined to stick it out a little longer. 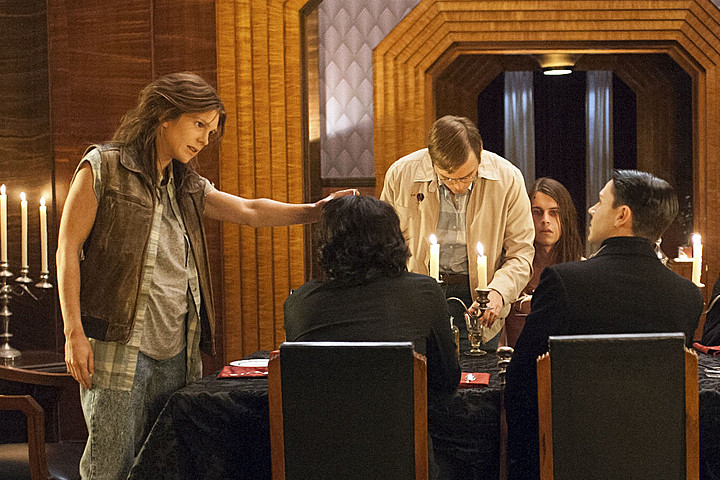