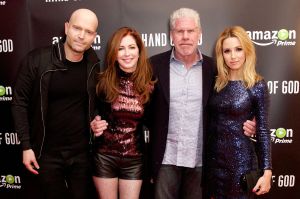 Is there a higher power guiding us through life and showing us the way? Hand of God blurs the lines between religion and insanity, tackling questions we are often afraid to ask, but what can we expect from the rest of the series?

Amazon’s latest original series Hand of God is a psychological thrill ride sure to have you on the edge of your seat. With a stellar cast of incredibly strong and seasoned actors you might be surprised to learn that Ron Perlman didn’t think he was good enough for the part. In an exclusive question and answer session at the London premier, the cast and crew discussed the series and hinted at what we can expect.

Ron Perlman (Sons of Anarchy) spoke of his desire to act in more TV shows in the future. When the latest Amazon original script was handed to him, Perlman was hesitant. Blown away by the depth of the story and character but unsure if he was cut out for the role, he questioned director Marc Forster’s decision to cast him. This to many of us seems ridiculous, anyone who’s seen Sons of Anarchy or Hellboy knows that Ron Perlman is more than capable as an actor, but it is nice to know that despite being a huge person in Hollywood, the man is still incredibly humble.

When questioned on what drew him to the character, Perlman quipped “just the notion of me being naked!”

Joking aside, Perlman goes on to talk about what really drew him to the role;

“The thing that intrigued me, and also really scared me, about tackling the judge was his state, emotionally, juxtaposed against who he is. We’re watching this guy who has this amazing skill set, who’s so compromised. He starts to grapple for purchase on things that are just way outside the realm of rationality.”

Doubting his ability for the role Perlman confided; “It scared me. When I first met Marc (Forster) and Ben (Watkins), I first of all couldn’t believe that they wanted to even go so far as to take the meeting with me, but since they did I shared with them my reticence.” Unsure he was up to the part, Perlman questioned Forster and Watkins who were very keen to have him on board and said that their desire to have him play the part of Judge Harris “empowered me to take the lead and play this guy who is clearly deeply wounded and emotionally very compromised.”

Using Perlman’s reticence as their mantra for the series, Watkins and Forster tried to use that idea of doing what scares you as their mantra when creating the series to which Perlman joked “So if you want to get a really good role in Hollywood, just tell them you’re not equipped!”

“He creates these archetypal women and you think ‘oh I know who that is’ but then all of a sudden you don’t know them. As the series progresses you start seeing other sides of Crystal and her background. It goes to some interesting places.” She said that the role is “fun to play” and that Crystal is “not what she seems”.

Ben Watkins, the writer of the show, most notably worked on action series Burn Notice and clearly has a talent and flair for writing dark and enthralling series’. Watkins said that he was inspired by “people who are fanatics” and how society responds to them when it came to writing Hand of God and, based on the pilot, his inspiration is easy to tell. Watkins says he is intrigued by the way we treat fanatics, and how sometimes we hail them as heroes while others are condemned as dangerous criminals; a theme that Hand of God explores in great depth.

Director Marc Forster is a respected and talented director having directed films like Quantum of Solace, Finding Neverland and World War Z and a question on many people’s lips was ‘why an Amazon TV series?’. Forster says that working with Amazon gave him the freedom to make the show his way without restrictions “one of the first times we showed them the pilot they said ‘it’s a bit short, add a few minutes’. That never happens in Hollywood, they ask you to cut out minutes and Amazon’s approach was a very satisfying experience as a storyteller.” Watkins backs this up saying “in Hollywood people often say one thing and do another. With Amazon they just said ‘we want you to make the best version of this story that you can’ and I have to admit I couldn’t believe it, I was waiting for the other shoe to drop but this was one of few occasions where someone was true to what they said. So at the end of the road, no matter what happens, you’ve made the show that you wanted to make and you’re proud.”

The cast and crew were in high spirits at the event, clearly very passionate about the show and about working with Amazon. The cast are behind the series all the way with Alona Tal, who plays Harris’s grieving daughter in law, saying that she cares a lot about her character’.

The series will be available in full on Amazon’s Instant Video streaming service from Friday so make sure you sign up if you haven’t already and get watching. It promises to be an enthralling and exciting watch and the cast and crew have promised lots of interesting things to come.