If you’ve already bought into Amazon’s little technology bubble then the Fire TV Stick is the one piece of kit you need to link it all together. It’s a small, easy to use and incredibly inexpensive little piece of kit that brings a whole world of movies and television directly to your living room.

It has a dual core processor for impressively fast streaming capabilities and it contains the entirety of Amazon Prime’s Instant Video selection. All you need is a TV with an HDMI port and an internet connection, and you can simply log in to your Amazon Prime Instant Video account and start streaming.

Amazon Prime have many great and exclusive series’ available to watch on their instant video service including the brilliant Transparent and the fantasy drama Outlander among many others which prove to be staunch competition for the likes of Netflix. Costing the same as Netflix’s basic package (£5.99 a month) there isn’t much in the way of price difference, so really the choice is up to personal preference. There’s a good run down  on tech advisor that explains the differences between the two options if you’re debating which streaming service to go for. 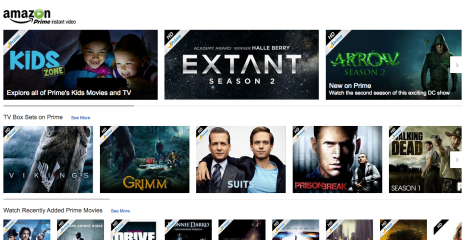 screen by linking up the devices, so you can fling your apps and games onto your TV to enjoy on a bigger scale, if that’s your sort of thing, but by and large this is probably not the most useful of abilities to have, although it could be fun to play around with.

As well as all the films and TV series that you can watch on your Fire Stick it has loads of apps in built too, including Netflix, iPlayer, Sky News, Spotify and 5 on Demand among others, so you can watch TV on demand and access your Netflix account if your pockets are deep enough to subscribe to both Netflix and Prime Instant Video.

There are many pros with the Fire TV Stick; there is a wide choice of TV series and films on there that you can flick through from the comfort of your sofa using the remote. The streaming capabilities are incredibly quick so there’s no faffing around waiting for anything to load or buffer, you can simply click play and start watching. The fact that you can do this on the TV without needing to painstakingly connect 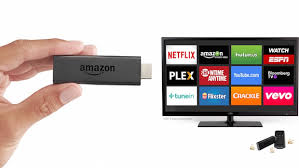 your computer to the telly (which if you’re a Mac user and happen to have one of the models without an HDMI port can be incredibly challenging) makes the Fire TV Stick a must have piece of kit for Prime Instant Video customers and at only £35 it doesn’t break the bank. There are a number of exclusive and very good TV series available including Outlander, Transparent, Extant, Arrow, Black Sails, Vikings and many more, and you can catch up on all 7 series of Sons of Anarchy now too!

As far as cons are concerned, there is nothing really wrong with the device itself, in fact it is difficult to fault. The remote is a good size, the design is sleek and smart and the capabilities of the device are very

impressive considering its size and very low price. Any cons are mainly down to the Prime Instant Video service itself. Obviously with any streaming service there are restrictions, and Prime Instant Video has many. For instance comedy TV series Parks and Recreation is available on Prime but only up to season 3, which is no good for fans of the show considering there are 7 seasons in total. This is just one example of where Prime Instant Video falls short of the mark. The choice of films is quite far behind and you rarely see recent DVD releases available

on there. If you look at the current selection of ‘recently added Prime Movies’ you’ll see that Sherlock Holmes a Game of Shadows (2011), Drive (2011), and The Dark Knight Rises (2012), are among the most recently added, so the selection of movies isn’t really that up to date.

Despite these downfalls Amazon Prime Instant Video and the Fire TV Stick are incredibly worthy competitors in the video streaming market. There is a wide variety of films and TV shows available, although admittedly in terms variety and how well up to date the selections are, Prime Instant Video is far better for TV series than it is for movies. At such a low price the Fire TV Stick is most definitely a must have for any existing customers of Amazon Prime and certainly something well worth considering for anyone who is currently debating signing up to a streaming service but is unsure which one to go for.