A couple of years ago I wrote 10 must watch postmodern movies, and to this day that article is still the most popular article on my blog, gaining more views per day than anything I’ve ever written. So I’ve decided to do a follow-up post in a similar vein, 10 must watch postmodern TV shows. I have a feeling the success of that post is down to the amount of college students studying postmodernism in Media Studies, been there done that! I distinctly remember searching for examples of things to watch and include in my essay as well so here’s hoping this post helps some of you with that!

I couldn’t quite think of as many as 10 examples for this article but as with the previous one, this is purely my opinion, feel free to disagree, recommend other shows etc in the comments below!

Community is my current obsession and a fine example of postmodern TV. The series follows a diverse group of people attending community college and uses pretty much every element of postmodernism. It’s full of parody, pastiche and self referencing as well as loads of intertextuality. It also breaks the fourth wall from time to time as well. Often the characters, particularly aspiring filmmaker Abed, refer to their ‘lives’ within the series as episodes and make fun of generic television conventions. There are tonnes of references to other films and TV shows, often giving new names to popular films in order to mock them (such as Troy and Abed’s favourite film series Kick Puncher, which parodies films like Terminator). Each series has at least one bottle episode that’s different from the rest, playing with different mediums for example one Christmas episode was entirely animated. It’s a hyperconscious series that plays with all the boundaries of the television medium whilst playfully mocking and parodying it.

Similar to Community with its self referencing and breaking of the fourth wall, Family Guy is a great example of pastiche, parody and satire. Often referring to the constraints put upon the series by its own network, for example when Peter Griffin complains to the audience about the network stopping the show after its third series (before returning it by popular demand). Peter always referring to his cutaways, setting them up and thinking of ideas, is a way to not-so-subtly show that the series is hyperconscious and aware of its own medium. Like many of the postmodern films mentioned in my previous article, Family Guy doesn’t try to tell the audience that it’s real (although this would be difficult being as it’s animated!) instead it reminds the audience constantly that it is only an animated TV show in which anything can happen. Family Guy often uses current affairs and news stories, particularly about celebrities, to satirise the world around it and mock real-life day to day occurrences. The show has a knack of saying what everyone is thinking about certain things in a witty and cutting way, for example in one episode when they made reference to HBO vampire series True Blood, Brian said ‘No one knows what that is’ to which Stewie replied ‘Rich gay people do’.

Modern Family is a mockumentary that follows the lives of three small families who are all joined together. Presenting fictional events in the form of a documentary is a form of parody which in itself creates humour. Modern Family’s shaky, observational shooting style and excerpts in which characters are ‘interviewed’ on their couches, seemingly addressing the audience directly attempt to parody observational documentaries and satirise American family life. All the characters fit fairly extreme stereotypes; the gay couple with the adopted Asian child and the older man married to a young, attractive foreign woman who from the outside looks as though she is only with him for his money. The dumb, happy go lucky guy with the nagging wife and two teenage sisters, one bookish and nerdy and one ditzy and pretty. These stereotypes all come together to create one big parody of American life and the mockumentary style helps to really bring out the comedy in the situations that they get themselves into. While slightly less in-your-face postmodern without lots of self reference and intertextuality, Modern Family is an example of a more subtle form of satire and parody. 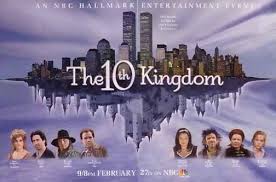 The 10th Kingdom is a slightly older TV miniseries that many people watching now will think of as dated and crap, however its use of intertextuality and reference to literature (predominantly fairytales) is an example of how other media texts can be recycled to have a whole new meaning. Although not modern now, when it first came out in 2001 The 10th Kingdom was a modern re-imagining of many old fairytales, breathing new life into them (which is something Hollywood has done countless times with films like Maleficent and Snow White and the Huntsman). A woman and her father are transported into a whole other world and must find their way through nine different kingdoms in search of a magic mirror that will transport them home again. Each kingdom is based loosely on a different fairytale with clever little references to the stories and characters within them.

Gogglebox is a ‘reality’ TV show (although in my opinion no reality TV is actually proper reality, but that’s another blog post altogether!) in which participants sit at home and watch TV, commenting on it all the while for our entertainment. Gogglebox celebrates the world of television and invites us to critically watch what’s on TV through the eyes of other people, so in a sense we are analysing TV through a TV show. We are being invited to watch a TV show about TV shows, it’s a TV show about its own medium that invites people, both participants and the viewers at home, to mock, laugh at and celebrate everything that comes to our screens at home. Gogglebox sounds like a bizarre TV show, watching people watch TV, but is actually strangely entertaining! And what is perhaps most ironic is that the armchair critics that participate in the show have gone on to become minor celebrities and the show itself is winning Television awards.