What’s bigger than a giant mythological snake that lives underwater? The colossal feeling of disappointment that this film brings. If you came looking for awesome Viking action then look elsewhere, the Ragnarok DVD cover lies.

The ancient and modern worlds both collide when an archeologist uncovers the true meaning of the secret runes discovered in the Oseberg ship.

Firstly, no they don’t. In fact there is very little colliding of the ancient and modern worlds occurring at all. We see a couple of repeated shots of Vikings, probably because they couldn’t afford to hire the costumes for more than one very short-lived shoot, and that’s about it. Minus of course the massive sea snake that appears every now and then and is about as threatening as a garden caterpillar.

An archeologist gathers a small group together to go in search of more runes and relics but ends up in a bit of a pickle when the fact that his group contains two young kids predictably fucks everything up. Literally the entire massive mythological snake debacle wouldn’t have happened if it wasn’t for the annoying bloody kids!

There really is very little to say about this gigantic waste of time other than that it is a complete let down. When you pick up a DVD that claims it is ‘the closest you’re going to get to a new Stephen Spielberg movie in the manner of Jurassic Park or Raiders of the Lost Arc’ you can’t help but expect big things, and by big I mean more than just a giant CGI snake that looks like Harry Potter’s Basilisk’s long lost, dirty cousin.

While the film is shit, there is potential, and that potential is what made me part with £7.99 for the

DVD. The cover looks misleadingly promising and much of the film is actually very well shot and looks pretty good. The fact that nothing happens, though, kind of lets it down.

If you still want to watch this film after my rant then look away now because I am about to give it all away. Trust me it’s anticlimactic, because as I may have mentioned already nothing happens! 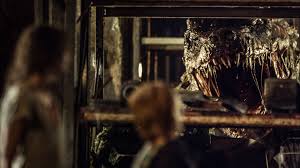 So while the group are scrubbing around in a cave looking for relics and things, as archeologists do, one of the irritating kids picks up something that looks a bit like a giant egg and stuffs it in his backpack. Naturally all hell breaks loose when it hatches out a funny little growling, squealing snake. That’s when the Ragnarok starts attempting to attack the group in a series of anticlimactic moments of ‘terror’ in which there is very little threat, all things considered. Finally when we reach a climax and think something big and awesome might happen, they give the snake its baby back and it turns around and slithers out. It literally slithers away and leaves it at that. What could possibly be more of a let down?!

Ragnarok looked like it could be brilliant, but the DVD cover promised more than it could deliver and after spending £7.99 on it I feel more than a little bit bitter! Credit where it’s due the CGI isn’t the worst I’ve ever seen, the acting is pretty OK and it’s nicely shot, making good use of the stunning scenery but those are about the only positives. If you still choose to watch this film, don’t say I didn’t warn you.