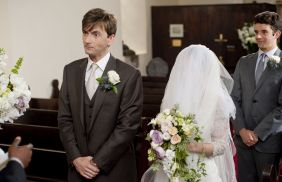 Ever fancied seeing David Tennant strut his stuff in tartan flares? Well now’s your chance! A well written, well acted rom-com set on a beautiful remote Scottish island, what more could you ask for? The Decoy Bride is an under-watched gem deserving of far more publicity.

The world’s media infests a remote Scottish island when word gets out that famous Hollywood actress, and every mans ideal woman Lara Tyler (Alice Eve) has travelled there to marry author James Arber (David Tennant). Needing a distraction to throw the paparazzi off the scent Lara’s agent enlists the help of island native Katie (Kelly Macdonald) and uses her as a decoy bride.

cheesiness and predictability are easily forgiven when a film is well done. With a small but well chosen cast and a well written script The Decoy Bride is full of laughs, particularly from Kelly Macdonald who does a fantastic job playing unlucky in love Katie, who’s moved back home to the island to help her terminally ill mother. Her on-screen chemistry with Tennant is both adorable and laugh out loud funny at times and the film has an infectiously happy and uplifting vibe.

For a film with a relatively small budget (2.5 million to be exact) The Decoy Bride makes great use of the sprawling Scottish countryside and stunning sea views, it’s beautifully photographed and with such a talented cast the smaller

A gem of a film that went sadly underwatched upon its release, The Decoy Bride is definitely well worth checking out. It’s beautiful to watch, well acted and actually very funny, and failing all else David Tennant is always easy on the eye (wink wink!)

5 thoughts on “The Decoy Bride”