The second instalment of Suzanne Collins’ The Hunger Games series has finally come to life as Catching Fire hits the big screen.

Katniss (Jennifer Lawrence) and Peeta (Josh Hutcherson) end up becoming targets of the Capitol after their victory in the 74th Hunger Games sparks rebellion. They are once again thrown into the games as a special 75th anniversary edition calls for the victors from each district to compete, and they must fight for survival once more.

Catching Fire has an all round darker feel to it than its brightly coloured, teen-romance-style predecessor showing a brilliant development of Katniss’ character. We’re thrown into a much darker, more disturbed world and our heroin is struggling with her past demons. Although this does make it ultimately less fun and entertaining it is a necessary development of the plot that, according to readers of the novels, sticks very close to the original story. We see Katniss grow as a character, largely aided by Lawrence’s fantastic performance, and it adds layers to an already strong storyline.

Far from the explosive start that one might be expecting, Catching Fire begins almost painfully slowly with a build up that’s about an hour and a half long. The games don’t begin until a good third of the way into the film, if not further, and the beginning does at times feel laborious and stretched out. Although according to fans of the books, this is accurate, in terms of what makes an exciting film the opening and the build up verges on tiresome at times. Despite this the character development and the tension is fantastic and almost tops the first film, it gives us plenty of time to build expectations

and tension before the games begin, and when they do it does not disappoint!

As can be expected from a high-budget film, The Hunger Games: Catching Fire is visually beautiful. Director Francis Lawrence makes great use of special effects that give the film that exciting sci-fi feel, and it certainly steps things up a bit from the first film. The performances are fantastic, as can be expected from such a brilliant list of names, Donald Sutherland, although playing a largely dislikable character, has a brilliant presence throughout the film and Lawrence is of course amazing. 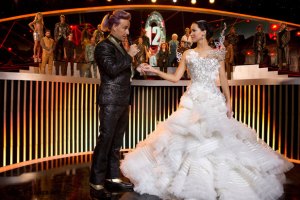 It’s not often that a sequel is as good as the first but Catching Fire comes very close. It’s highly entertaining but adds depth to the story and the characters rather than layering on the cheese. Definitely one to go and see on the big screen, although it seems that not releasing it in 3D could well be a missed opportunity.