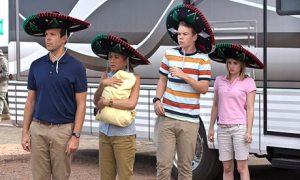 Road trip movies are aways a win for comedy lovers. We’re the Millers is a ridiculous laugh out loud romp and is road trip comedy at its finest.

A pot dealer has to find a way to smuggle a large amount of marijuana across the Mexican border after his high profile boss finds out he’s lost all his money (and his drug supply) to thieves. David (Jason Sudeikis) concocts a fake family and travels across the border in an RV to avoid arousing suspicion, but of course things don’t go completely to plan.

We’re the Millers manages to give us something we’ve not seen before despite having a relatively unoriginal premise. The acting is top notch and the script is brilliantly written, full of laugh out loud comedy moments. It’s your 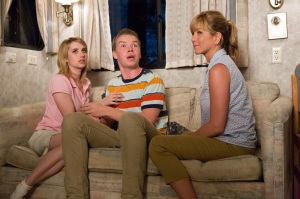 typical over the top comedy designed to get the audience laughing hysterically and not worrying about the quality of the film itself. Despite having a brilliant cast, names like Jennifer Aniston, Jason Sudeikis and the occasional appearance from Ed Helms promised a lot more than was delivered and although the acting and the comedy is good it could have been loads better. If you can get past his annoying eye brows, Will Poulter delivers a brilliant performance as David’s innocent and inexperienced fake son Kenny, in fact the young stars; Poulter and Emma Roberts, manage to outshine the comedy veterans. 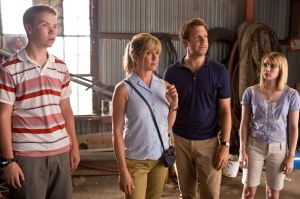 We’re the Millers is good, crude fun and definitely deserves more praise than it’s been getting lately. It’s one of the funniest comedies to come out in a while and it’s an entertaining, laugh out loud flick perfect for a lazy night in. Despite all its faults it’s a highly entertaining film that won’t disappoint, and the fantastic cast makes it that much more enjoyable.

2 thoughts on “We’re the Millers”