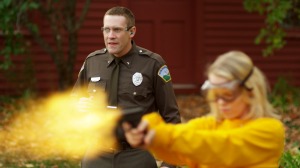 3 Days of Normal is a breath of fresh air, a cute and beautifully filmed little rom-com with none of the cliche glitz and glam of Hollywood. A small-town love story with a poetically slow pace and some solid performances, 3 Days of Normal is a heartwarming little indie film and an example of what more romantic drama films should be like.

Set in Washington, New Hampshire, a quiet little town, officer Bill Morgan (Jace McLean)’s self-imposed rules and regulations keep him bound to his hometown after the death of his parents. Everything changes when current it-girl actress Nikki Gold (Mircea Monroe) comes to town and Bill’s organised, orderly little life is turned upside down. 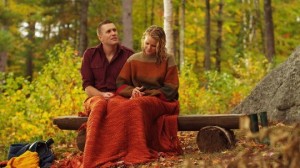 3 Days of Normal is set in a stunning location and the cinematography depicts it perfectly with warm colours and a focus on the outdoors and nature. The stark contrast between the beautiful green trees and the grey buildings of New York is very well done, and smaller lesser known parts of the US have been used which not only makes the film relatable for those outside of the US but also makes it more down to earth and realistic.

Lead actors Mircea Monroe and Jace McLean have a brilliant on-screen chemistry and they both deliver outstanding performances. The cast has been thoughtfully chosen with some other familiar 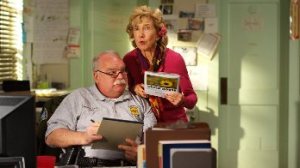 faces including Insidious‘s Lin Shaye and, what hasn’t he been in Richard Riehle. The film has this infectiously upbeat atmosphere and is stunningly filmed. It has that independent film feel to it that gives it lots of charm and little cheese.

The storyline is somewhat lacking but the only thing it lacks is any of the over the top, ridiculous cheese that we’ve come to expect from Hollywood rom-com’s. 3 Days of Normal presents us with a love story that is actually relatable and realistic rather than cliche. Very little happens because it reflects real life in a way that a lot of films don’t and the poetic, slow story makes it beautiful and heartwarming to watch. Nothing big needs to happen, the characters carry the

story and the atmosphere and general cinematography makes it a joy to watch.

An award winning film that more people should see, a fine example of the kind of independent film that should get much more marketing and a lot more publicity. Beautiful, cute and funny, what more could you ask for?