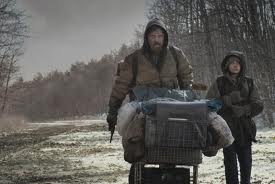 The Road is about as bleak and unexciting as post apocalyptic films get, but what it lacks in thrills it more than makes up for in heart. It’s a warm story about hope, survival and the love between father and son.

When the apocalypse hits a father and his young son are left to fend for themselves, wandering what’s left of the Earth in search of food and safety. Paranoia takes over and soon everyone they bump into becomes an enemy, the pair must fight to stay alive in the vain hope that one day the world can be rebuilt.

Had the kid, played by Kodi Smit-McPhee, been less annoying then the film might have been a little more moving however his irritating squeaks and childish sobs and his inability to stay quiet when 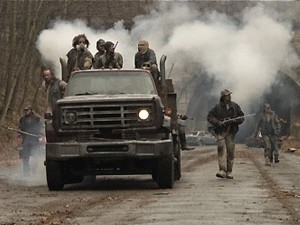 they’re being pursued by people out to kill and rob make him one of the most annoying child characters in cinema history. His dependence on his father and his childish naivety might be endearing for viewers with more maternal instincts but anyone less patient might find themselves wanting to jump through the screen and smack the kid around the head. Viggo Mortensen however delivers a brilliant performance as the desperate father who lives to keep his son alive and safe. His love for his son is completely believable and not once are his actions to keep his son safe questionable.

The Road is very slow and with little action it becomes rather laborious. There is no particular story and it plays out literally like a long road to nowhere. The end isn’t very conclusive and by the time you’ve trawled 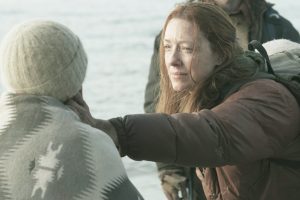 through mumbled, slow speech and occasional yet short bursts of action it feels a little bit of a let down.

Perhaps the sound levels aren’t great, maybe the sound man needs sacking or maybe I’m deaf, but more than likely director John Hillcoat needed to tell the actors to speak up a little. Don’t feel alone if you find yourself having to turn the subtitles on even if the last time you checked your hearing was fine, it’s not you and it’s certainly not your ears, the characters really are just mumbling their lines.

The Road is, despite its faults, a beautiful film to watch. The bleakness of the post apocalyptic world, the costume design and the special effects 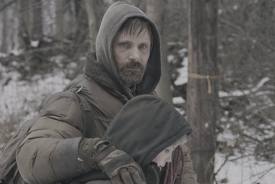 make it scarily realistic and the cinematography can’t be faulted. The film has a warm but very basic storyline, which, granted, works in a drama but unfortunately the lack of goings-on makes the one hour fifty minute run time feel like a decade.