A family drama with a decent cast and one of the most adorable dogs in film history, Hachi: A Dog’s Tale is perfect for anyone that understands that bond of undying love between a four legged friend and its owner and is a beautifully heart rending little film.

Based on a true story, Hachi: A Dog’s Tale is about a college professor who finds an abandoned dog and forms an unconditional bond after bringing him into his home. When no one comes forward to claim Hachi, Parker Wilson (Richard Gere) manages to persuade his less-than-convinced wife to keep the dog and he becomes a valued and loved member of the family.

Hachi: A Dog’s Tale is a remake of the Japanese film Hachi-kō released in 1987 and like many true story films has been hugely Americanised. The titular Hachi-kō, a gorgeous Akita Inu, was found at a train station in Tokyo by a professor at the nearby University of Tokyo and waited for him every day at the same station until long after his master’s death. His immense loyalty and love for his adoptive owner has become something of a legend. It is unfortunate that the original Japanese film is so difficult to get hold of, the authenticity of the 2009 remake is tainted by the Americanised cast, setting and overall style.

Although Hachi: A Dog’s Tale is a beautiful family film with a decent cast and a tear-jerking true story the film plays out almost as a montage with no real substance or plot to it. It’s very slow moving with no real direction to begin with and although it has a poetic feel about it, it is ultimately very strange. It’s difficult to say just through 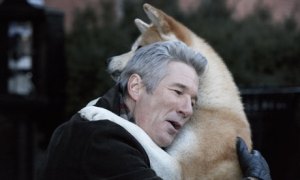 researching the true story how accurate this film is and how true it is to the original film adaption but it’s a very raw, heart warming portrayal of a dog and its owner and the actors do a brilliant job. A Japanese dog, not just by location of birth but by breed too, finding its way to an American station and an American family is all too convenient though and a more realistic setting would benefit the film. It feels like a bit of a desperate stab at taking yet another successful Asian film and making it American lest the poor American audience should have to try and understand something from a different culture; this comes from the country that demanded the badgers in 101 Dalmatians be turned into skunks and racoons, despite the London setting of the film, because the kids of America ‘wouldn’t understand the badgers’.

Hachi: A Dog’s Tale is a beautifully shot film, poetic in pace and completely adorable. It’s one of those loveable films that

despite it’s flaws you couldn’t possibly hate. The canine actor is the star of the show, rightly so, and his on-screen bond with Richard Gere is so believable it makes the end of the film that much sadder. Despite being totally Americanised it is a decent portrayal of the story and not a corny Hollywood mess as you might expect, it has a warm and realistically raw feel to it. The perfect film for dog lovers, and one that will make you want to drag your dog over for a big cuddle at the end.

As a family drama Hachi: A Dog’s Tale hits all the right notes. The dog is adorable, the story is heartwarming and the acting is decent too. It’s nothing particularly special and it’s merely a ‘nice’ film,

nothing more and nothing less. It’s a shame the original Japanese film isn’t quite as easily accessible, and it’s a shame the whole thing has been Americanised like many true story films are, but for a harmless, cute bit of family entertainment you can’t possibly go wrong with this one. Although you may need tissues.