When I was a kid I’d play Grand Theft Auto before I even knew what a prostitute was or how a gun worked. My favourite way to play the game was to use a cheat to deactivate the police and just run free killing people in imaginative ways with an array of weapons.
My brother and I found a list of cheat codes online for all sorts of fun things, including turning all pedestrians into clowns. My dad ‘proof read’ these cheats and scribbled one out, obviously he thought we were too young for that one, but didn’t mind that we had cheat codes for fancy weapons and jet packs; they taught us right from wrong, they had no reason to worry that we’d ever, in a million years, think that the things we did in a game of GTA were acceptable ways to behave in real life. We were kids, we weren’t imbeciles.
Inquisitive as we were, we found that if we held the cheat paper up against the window we could see through dad’s scribble and make out the cheat code. At the tentative ages of about 10 and 8 (my brother is two years younger) we exchanged a look of bewildered confusion “What’s a gimp suit?” Cue days spent mindlessly flying around with a jet pack wearing a gimp suit and laughing as a stream of prostitutes ran around on the ground beneath toting brightly coloured dildos.

We are now nearing our 18th and 20th birthdays and neither of us has so much as broken a law. Well ok, we’ve broken

plenty, but only the usual ones like not wearing our seatbelt on the bus and drinking underage; nothing serious like, you know, murder.

I started watching horror films when I was about 11, and I think my parent’s relaxed stance with things like violent games and horror films is largely the reason I didn’t turn into a monster. Those things weren’t treated as taboo in our house, so they were never anything more than mindless entertainment or an escape from every day life. Sure I felt really grown up that summer when my friend and I, aged eleven, watched every eighteen rated horror film we could find, starting with The Hills Have Eyes (the 2008 remake), but because my parents didn’t shelter me from age-rated things and because they didn’t scream ‘no!’ at me if I so much as hinted at watching a fifteen when I was thirteen (like some parents do) I never associated them with being bad, wrong or something to be feared. That dialogue between parents and children is very important, if you teach kids that something is bad, naughty, dirty or something to be feared, then they will grow up with a very different attitude towards it than if you’re more relaxed. That doesn’t mean to say you have to let your child watch eighteen rated films, and my parents didn’t technically let me watch those horror films until I was about fourteen, by which time they’d learned that I liked horror films and if I wanted to watch them I would find a way whether they liked it or not.

If you scream ‘no’ at your kid and thrust your metaphorical crucifix in the general direction of an eighteen rated horror film hissing like some kind of angry vampire, not only will the kid’s curiosity skyrocket to the point where he/she would risk a slapped backside and a spell on the naughty step to watch it while you’re not looking, but they will also subconsciously associate it with reality and that blur in the distinction between what’s real and what’s not is when trouble happens. Because in the kid’s mind, if it is just a film, why would mum and dad practically erupt at the notion of them so much as looking at the DVD case? Surely to make mum and dad that angry/fearful/strict it would have to be something so much more than just a film, right?

I’m not saying that every strict parent that prevents their kid from watching horror films before they’re old enough is creating a monster that’s going to go out and murder people, not at all, but I am saying that the way parents treat and talk about these kinds of things has a huge impact on the children’s perception of reality and representation. A horror film is just a film, it’s all fake so why blow it out of proportion? Why scare little Billy with your over the top reaction when he asks if he can watch it? If you don’t want him to see it, fair enough, but you could at least calmly explain the premise in child-friendly 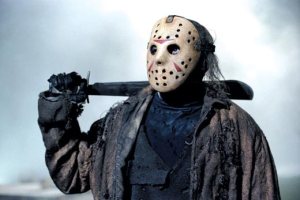 terms so he doesn’t go to bed thinking that films are something to be feared, as if the DVD case will sprout fangs and eat him if he so much as opens it.

I’m not going to go into an ‘I blame the parents’ rant, but a lot of these cases involving violent children is down to their upbringing. Yes I have read We Need to Talk About Kevin and yes I am aware that a lot of the parents are probably equally as surprised by their kids behaviour as we are but there is clearly something wrong with a kid’s upbringing if they can take a

gun, go into a school and shoot a load of innocent people. Regardless of how many violent films they’ve seen or games they’ve played there simply has to be a deeper problem somewhere and is it not the parents responsibility to get their kid help if they notice that they have some kind of mental illness? If media is to blame for real life violence, how can SO MANY people watch horror films, video nasties and play violent games every day and manage to act like a normal human being? Surely if the media was to blame, anyone and everyone who played these games or watched these films would be a murderer. How can ‘the media is to blame’ even be a legitimate theory when the vast, vast majority of people in the world consume such media every day and do not commit a crime in their lives? There is something very wrong with someone who doesn’t grasp that what happens in a film isn’t necessarily OK to do in real life. Anyone who plays a violent video game and then goes out and guns a load of innocent people down has issues much deeper than simply ‘I saw it in a game once’. NO ONE with a sane mind watches a film or plays a game and thinks ‘Hmm, I’m going to go and do that now. Going out and abducting someone to torture is totally OK because I just saw it in that film’. I refuse to believe that anyone without a serious mental illness would go out and commit a crime because of the

types of films they watch, in which case it’s not the media that’s to blame for the crime it’s the untreated mental illness, and of course, the individual themselves.

Ultimately we need to stop making excuses for people that commit terrible crimes. It’s no one’s fault but the perpetrator. It’s not the media’s fault. It’s not Grand Theft Auto’s fault. It’s not the fault of ‘video nasties’. The only person at fault is the one who pulls the trigger and we should stop making excuses for them, to blame it on films and games is to take some of the blame off the murderer and where is the justice in that? Even if they do have a severe mental illness, they still committed the crime and I wish we could get out of this ridiculous way of thinking, grow a backbone and have the guts to say I don’t care if they’re mentally ill, they killed a person. And that is not OK and there is no excuse for it.

Horror films and violent games are at fault for nothing. They are not responsible for badly behaved kids, or people that commit crimes. They are entertainment and they are not real, and horror films are just films, not ‘video nasties’. If the majority of the horror movie watching world can act like a normal human being and know the difference between what’s acceptable in a film and what’s acceptable in real life, then there’s no excuse for those in the minority who commit crimes. So what if they watched Hostel the day before? As a human being in the 21st century, we should all know that killing or harming others is wrong, and just because you saw it in a film it doesn’t make it ok.

4 thoughts on “Kids and Video Nasties: The Media as a Scapegoat for Crime”