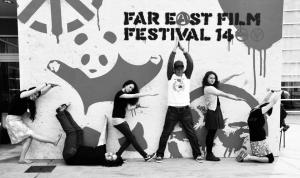 If you love East Asian cinema, then you may be interested in what CUEAFS will be doing out in Italy from the 18th of April.
Udine Far East Film Festival is held annually and celebrates the best of recent East Asian film. If you want to see what films will be screening, have a look here.

CUEAFS covers the whole event; interviewing directors, shooting videos, taking photos, reviewing films and writing articles. All of this can be followed on our Facebook and Twitter and via our website. I’ll predominantly be writing film reviews, and have to cover all the horror films. I don’t think I’ll have time to blog much while I’m out there because the deadlines are so tight but my reviews along with all the other work that the other members of CUEAFS will be doing can be followed through our website and Facebook pages.
We’ll have exclusive interviews with all the guests including Herman Yau, director of Ip Man: The Final Fight and many

other awesome people, so keep an eye out!

Like us on Facebook, follow us on Twitter and pay a visit to our website to keep up with what we’ll be doing out in Udine, and no doubt discover some great new East Asian films to keep your eye out for!

More information on Udine Film Festival can be found here.