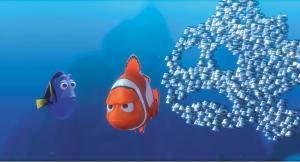 Finding Nemo is a 2003 animated adventure-comedy from Pixar, with a fantastic voiceover cast including Ellen Degeneres, Albert Brooks and Brad Garrett.

I will admit yesterday was the first time I’d properly watched Finding Nemo. Shameful I know! But with a sequel (Finding Dory) on the horizon for 2015 I thought I’d better give it a watch!

When his son is captured by divers, reclusive clownfish Marlin sets out on a dangerous journey to find him, accompanied by a forgetful Dory.

Dory completely steals the show and Ellen Degeneres is brilliantly cast. I’m a big Ellen fan anyway, but bias aside she really is the star of the entire film. most of the comedy comes from the scenes of Dory and Marlin as they set out on their quest to find

Nemo. Dory is the perfect dippy, forgetful comedy character and without her I honestly think the film would be awful. It’s unusual for any film to be held up by a support part whether it’s animated or live action, but I got the feeling throughout that the whole father-son thing is too predictable that it needed a character like Dory to turn it from something mediocre to something great.

Despite being a decade old now, Finding Nemo still stands as one of the best animated comedies to come out of Pixar and I’m glad that it’s getting the sequel treatment because I’m a sucker for a good animated comedy! In my opinion none of the more recent Pixar films can beat the classics, e.g. Toy Story, and I would definitely put Finding Nemo up there with some of the better Pixar films.

It’s got everything you could possibly want from a family friendly animated film. It’s cute, funny and uplifting and it has the subtle 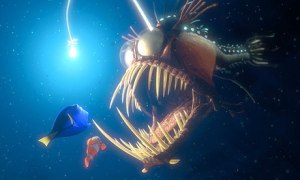 wink and nudge jokes for adults that kids don’t understand, so it’s inclusive of any audience.

I wish I’d seen this film sooner, but good things come to those who wait and this definitely delivered. I’m probably the only person in the world who didn’t watch Finding Nemo ten years ago when it came out, but I’m glad I finally did!