Sightseers is darkly funny, and there is a tinge of ironic humour through out. It wasn’t the comedy drama I imagined it to be and I was pleasantly surprised and very impressed.

It’s very dark and rather twisted! It’s surprisingly brutal in parts but it’s ultimately very good fun. I think you have to take it with a pinch of salt, and it probably does tread very closely on the line of bad taste and no doubt would offend a lot of people but I found it very entertaining.

The photography is stunning, it’s got a raw feeling about it, with obvious camera shake and a very bleak colour to it. The music is used sparsely but the soundtrack is very good, a lot of films tend to forget to use music to accentuate what’s on screen and lapse into 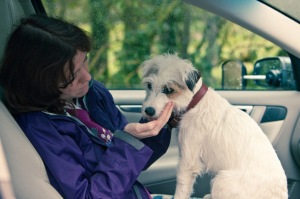 overuse, Sightseers uses very few tracks and all of them add something to the image.

Some of the shots of the scenery are beautiful, and the colour gives it a really cold, bleak feel about it. The atmosphere really comes out of the screen and absorbs you completely. I was lost in this bizarre, brutally funny story and attached to the characters.

The style of humour reminded me a lot of Cockney’s Vs Zombies, another recent British black-comedy. It is very British, and the humour is subtle and almost sarcastic. Rather than blatant winks and nudges it’s subtle, very very dark humour.

I would definitely recommend Sightseers and it was worth the wait! I wad pleasantly surprised with what I saw, and was expecting another British comedy drama but got something far more interesting! Worth a watch.