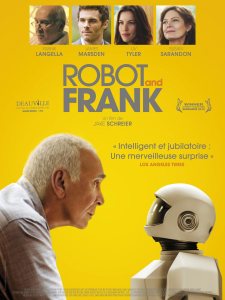 Warmly funny and at times deeply sad, ‘Robot and Frank’ is the story of a retired cat burglar struggling with altzheimer’s.

When Frank’s son Hunter (James Marsden) decides it’s time to find an alternative solution to his weekly ten hour round trip to visit his father, he buys him a state of the art robot to be his carer. Despite his initial scepticism, Frank slowly befriends the robot and finds that he has more uses than cooking and cleaning.

‘Robot and Frank’ is a warmly funny drama set in the not too distant future. It deals with the futuristic setting similarly to how ‘The Perks of Being a Wallflower’ represented the early 90’s; it’s not too out-there or stereotypical giving it an aesthetically pleasing and believable feel. There are subtle hints at the time period by use of technology, but they’re subtle enough to avoid appearing presumptuous about what the future will hold.

Frank Langella does a fantastic job playing a confused elderly man battling with altzheimer’s, and the character is endearing despite his background in crime. His struggle to remember his family is at times heart wrenching and is an issue that will no doubt touch a lot of peoples hearts.

An unlikely friendship grows between Frank and the robot, whom he never names, and they eventually become partners in crime. Frank teaches the robot tricks of the trade and finds he’s pretty nifty at picking locks. Not only is it a heart warming story about friendship but it’s an insight into what life might be like in years to come.

The impact of technology on society has been speculated over for years, and far from simply being a cute drama about friendship, ‘Robot and Frank’ deals with underlying issues about our reliance on technology and our tendency to depend upon technology over people. The majority of young people can’t go a day without checking Facebook or texting on the latest iPhone, and ‘Robot and Frank’ addresses the societal worry that one day, technology will take over. Frank eventually rejects human company from his own children and prefers to spend his time with the robot, despite his daughter’s worries about technology controlling his life.

The cinematography is beautiful, some of the shots are stunning (the top picture in this post is a shot that stood out to me). It’s very warm and colourful, the futuristic elements don’t get in the way of the aesthetic beauty which could easily have happened. Also notable is the soundtrack, it’s warm and tasteful and, as soundtracks should, it compliments what’s on screen nicely. The whole thing comes together as an aesthetically pleasing, warm piece that draws you in until the credits roll.

The ending was a complete surprise, I wasn’t expecting a twist in a film like this. I was imagining it to be a formulaic drama, but 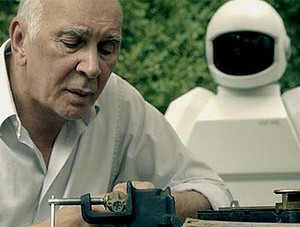 the twist makes it so much more memorable. I won’t give it away, but I certainly didn’t see it coming! It’s a mean feat to achieve such a disguised and unpredictable twist, I can honestly say I was completely taken aback by it!

A beautiful film in every way, the story and the aesthetics are great. It’s one of those films that sucks you in from the start and then refuses to let you forget…I know I’ll be watching this one again sometime for sure.

7 thoughts on “Robot and Frank”