Postmodernism has been my favourite media theory since A-level media studies, and postmodern texts fascinate me.

Scream is one of the most referenced examples of postmodern cinema, and is  a   great example of how some audience members just don’t ‘get’ postmodernism. If I had a pound for every time I’ve heard people say Scream’s a rubbish horror I would probably be able to pay my tuition fee up front!

For me Scream is ingenious. Wes Craven, director of A Nightmare on Elm Street, celebrates and at the same time mocks the horror genre through self reference and intertextuality, even appearing in the background of one of the shots dressed as Freddy Kruger. The entire film is full of self reference and intertextuality that treats the audience as all knowing, requiring us to be active viewers, not passive.

But Scream, released in 1996, is now quite an old example, and there have been a great many recent postmodern films of equal worth.

Like Tropic Thunder, many postmodern texts choose not to mask their medium, instead they let the audience know that they are watching a film. In my opinion this is the way forward, audiences are too aware of the media to allow films and media texts to simply inject them with messages, as the hypodermic needle theory implies. Instead audiences want more from the films they watch. We want to take an active role when we watch the film, and be treated as intelligent individuals.

Tropic Thunder is one of many films that are about a film. The film within a film idea will never get old. Tropic Thunder follows a group of actors and filmmakers as they make an ambitious action film about the Vietnam war. Things take a surprising yet hilarious turn when the actors find themselves unable to decipher the difference between what’s real and what’s special effects, and when suddenly they are ambushed by Vietnamese men with guns, they play along and act for the hidden cameras that they believe to be present armed only with guns full of blanks.

know their stuff. They mock their own medium, and the people involved in the film industry through clever one liners. Robert Downey Jr’s character parodies the films that would rather use make-up effects to make someone look a certain way (in this case to make a white person black) without simply casting a black person (like in the Hobbit when a bunch of average sized men were cast to play the dwarves). Hyperconsciousness and an awareness of its own medium is common in postmodern cinema, and for the most part it’s a successful comedy tool.

Postmodern texts like Tropic Thunder serve to remind the audience that films aren’t reality. They invite an active audience, and allow for different meaning to be taken from the film, depending on your personal reading of it.

Another form of postmodernism is intertextuality which is becoming more and more common in films. Easy A is a recent rom-com starring Emma Stone, with lots of funny and clever references to classic romantic films from the eighties. Take this example: 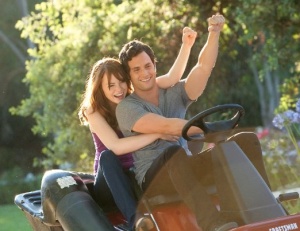 On the left is a scene from 80’s rom-com Can’t Buy Me Love, and on the right is a reference to said scene from Easy A. In both films the guy stands on the lawn mower below his love interests bedroom window playing music to try and win her over.

Easy A draws upon famous romantic comedies to explore the chliche’s of the romance genre and compare them to real life. Audience members who have seen the films referenced will take away a totally different meaning than those who haven’t and that’s one of the main points of postmodernism. It doesn’t seek to inject people with one message and meaning, it looks to allow audiences to take away their own interpretation of a text.

I’ve seen a lot of postmodern films, and it is becoming quite popular in cinema today. It’s something I’m keen to draw upon in my own work because I like the idea of treating the audience as all knowing, it often makes the text feel more accessible. I think we’re way past the times when people passively absorbed everything presented to them in a film, so in my opinion when making a film there’s no point in trying to disguise it as reality.

All these films have impacted my ideas for my own work in some way, particularly Scream. It’s made me think about the different ways we can present stories through film and how we can engage with the audience. A more recent example of a postmodern horror is The Cabin in the Woods, which also gave me a lot of ideas. I love the idea of making a film about a film in the future.